If a player hit 38 HR, and 100 RBIs in a season, you’d take that, right? Of course. Those numbers are two of Stanton’s many 2018 statistics. Yes, he didn’t repeat his 59 home run performance when he hit .300, and struck out more times in 2018 than any prior season. The expectations were higher than they’ve ever been for Stanton, and he didn’t meet those, but he still had a solid season. Would you have taken that performance from fellow outfielder Aaron Hicks? In a heartbeat. Any fan that says otherwise isn’t using logic and is taking Stanton by name alone. 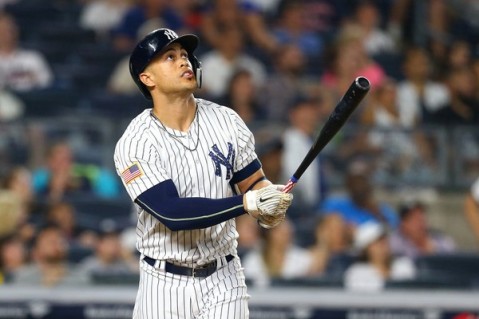 Stanton looks to build on the 2018 campaign (via Getty)

But it did raise the question of whether Stanton could be an effective player for the Yankees, especially in the later years of his contract. Thoughts from New York Area newspaper pundits included shipping him off to the Los Angeles Dodgers, a team that was in for him last offseason before he was eventually traded to the Yankees, and going after free agent and lifelong Yankee fan Bryce Harper. But rumors of Harper heading to the Big Apple were quickly squashed by Yankees General Manager Brian Cashman at the Winter Meetings in December. Cashman reiterated that their outfield was set, and they weren’t in a position to add. That changed quickly and less than a week later, Cashman made it a point that the Yankees were a “fully operational Death Star” and could basically do whatever they want because of their financial situation. They’re the Yankees, and they’ll operate like it.

And what was interesting was that he did. Going out to sign Troy Tulowitzki, D.J. LeMahieu and Adam Ottavino, while bringing back Zack Britton and J.A. Happ was nothing like what some fans hoped for, but for now it appears that Cashman stayed away from reeling in the big fish like Bryce Harper, Manny Machado, or even Dallas Keuchel.

No. Instead the veteran GM went for value to shore up his team and add depth. And when it was all said and done, Cashman decided to sign Aaron Hicks to a seven year contact extension worth $70 million. Compared to the $30 million plus per year that Harper is rumored to be seeking, the Yankees went for value and locked down their center fielder to a good value contract that—let’s be honest here—gives the Yankees the financial flexibility to eventually move that contract out if they wanted to down the road.

Some believed that Cashman was still lurking in the shadows, and would pounce on Harper if he heard that the price was right. That was until Harper inked a $330 million deal with the Phillies Thursday afternoon. But it seemed that he attempted to do that when Machado decided to wait out the free agency process, but Machado took the highest bid and ran off to San Diego to play for a team that lost 96 games in 2018. It’s also what he did with Stanton, when it was reported he was almost certainly going to Los Angeles or San Francisco via trade—but Cashman pounced and landed the 2017 NL MVP for Starlin Castro and minor leaguers Jorge Guzmán and José Devers. While it’s not quite the same situation as Harper, the Yankees would certainly be open to a shorter term deal with him and would splurge on a three or four year deal.

You can never predict the Yankees because after all, they’re a “fully operational Death Star,” and that’s part of what makes the Evil Empire so dangerous every year. But this offseason has shown that Brian Cashman still has some tricks up his sleeve and can get great value for the right price. That said, Stanton’s large contract looms over the Bronx, and while some may see it differently, the Yankees should be happy with his 2018 season and look to help him build on it in 2019.