By Jack Allen
The Colts enter their 3rd season under quarterback Andrew Luck. Luck is presented with many targets and an upcoming running game with Trent Richardson at the helm. Trent struggled last year after a mid-year trade from Cleveland, but a full offseason should give him time to study and learn the playbook. The Colts have an easy division and should be set for a good season. I do not believe they’re Super Bowl contenders, but their record will propel them into the playoffs. I believe they’ll get knocked out early by a Wild Card team, but that they’ll win their division easily.
Is Jake Locker the guy in Nashville? Locker hasn’t been able to get his team into the playoffs, or fairly close. With a rookie RB out of University Washington, Bishop Sanky can possibly elevate the team to win a few games, but I don’t see them even staying close to a .500 record. After losing Chris Johnson, this is a new era of Titans football. Maybe this can be a breakout year for Jake Locker, but if that doesn’t happen you’d have to imagine there would be changes next Fall at the quarterback position for the Titans. I think they’ll get 6 wins and place second, proving this is easily the worst division in the NFL.
Houston had the first overall pick this last spring. They selected Jadeveon Clowney from South Carolina. The Texans had an extremely disappointing season last year after starting 2-0, lost their last 14 games. They benched quarterback Matt Schaub, and started Case Keenum. Case Keenum had limited success as well. Matt Schaub was traded to Oakland in the offseason. Andre Johnson has become a major distraction in the locker room, as he continues to request trades. With a young quarterback and and an arsenal of wide receivers, the Texans have a bright future. Yet to mention their defense, lead by former defensive player of the year JJ Watt, is stellar. The Texans will eventually get back in to the playoffs, but this season is a rebuilding year for their offense. 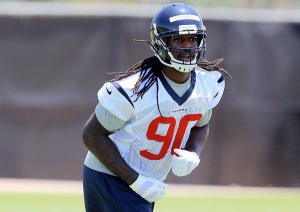 The Jaguars have been absolutely horrible the last couple years. If you’ve been a Jags fan, you’ve had very little to cheer about. They took Blake Bortles from UCF with the #3 overall pick. The fans are hoping Bortles can be “the guy” for the future in Jacksonville. Chad Henne will compete with him for the starting job in training camp. Henne has lead them to absolutley nothing the last few years. With Maurice Jones-Drew in Oakland now, Toby Gerhart now has the starting running back gig in Jacksonville. I say they show some flashes of hope, but don’t think that they have the team to compete in the AFC South.
Prediction
1). Colts 11-5
2). Titans 6-10
3). Texans 4-12
4). Jaguars 3-13

Jack Allen is a writer for dabuzzza.com. He is a fan of the New York Mets, New York Islanders, New York Knicks, New York Jets, Seattle Seahawks, Seattle Mariners, Queens Park Rangers, and West Virginia Mountaineer football and basketball. His favorite athletes are David Wright, John Tavares, Geno Smith, Allen Iverson and Charlie Austin. He is a very passionate and determined fan. You can follow him on twitter @JackAllen99.

Moments Of The Week: Week 10

By Brett Malamud and Jake Rosenstein

This week in football was pretty memorable and there were a few key moments that stood out in our minds. Here’s a look at some of those moments:

Andre Johnson made a sick catch for a touchdown.

Nick Fairley made a game winning stop and did a little dance to celebrate.

DeSean Jackson opened up the scoring with a 55 yard bomb from Nick Foles.

Tavon Austin returned a punt for the 98 yard touchdown, in what would be the first of three touchdowns for him.

Offensive Tackle Donald Penn caught a touchdown and slammed it home as the Buccaneers headed towards their first win of the season.

And finally, our moment of the week. AJ Green caught the game tying touchdown with no time remaining on a hail mary.