Right off the bat, if your fantasy team had to go up against Robert Griffin III like mine did last night, I’m sorry. RG3 torched the Vikings defense for a total of 27 fantasy points in ESPN Standard Leagues. My other fantasy team had to face Adrian Peterson, who rushed for two touchdowns and scored 19 fantasy points in ESPN Standard Leagues. It’s pretty safe to say that I was a bit unhappy while watching the game from a fantasy football perspective. However, it’s not always about who starts, but rather who finishes. Before we get to it, a quick shout out to Mr. Roto, Matthew Berry, who has been doing Love/Hate for years. On that note here are my Love/Hates for week 10 in the NFL:

Quarterbacks I Love in Week 10

Jake Locker vs. Jacksonville Jaguars: Why would you think of starting this inconsistent quarterback, you ask? Well, the Jaguars defense has allowed double digits to quarterbacks in every single week.

Jay Cutler vs. Detroit Lions: While the Lions defense has allowed double digits to quarterbacks in every single week except for week one, that’s not the reason I would start Cutler. I believe that the Bears’ receivers performed well over the last few weeks without their fearless leader and with Cutler back, they’ll excel even more.

Philip Rivers vs. Denver Broncos: Rivers has been on fire for the entire season and has done very well for my fantasy team. I am expecting a big game out of him against a team that has a weak pass rush that allowed more than 300 yards to Chad Henne.

Quarterbacks I Hate in Week 10

Andy Dalton at Baltimore Ravens: Here’s a guy that was on my team and was traded in a blockbuster deal for Peyton Manning. Looking back, I was pretty happy that I got the top scoring fantasy player in the NFL. But Dalton did have a streak of his own over the last few weeks. However, the red headed Dalton struggled last week against the Miami Dolphins. Look for Dalton to struggle in a loud M&T Bank Stadium, where the Ravens have been red hot on defense.

Matt Ryan vs. Seattle Seahawks: Ah yes, Matty Ice. It’s fair to say that Matty Ice has gone ice cold, throwing seven interceptions in his last two games. It’ll definitely be tough for him to go up against the second best defense in the NFL.

Case Keenum at Arizona Cardinals: The streak has got to end, right?

Running Backs I Love in Week 10

Reggie Bush at Chicago Bears: Fans in Detroit have been voicing their pleasure at Lions home games with chants of “Reg-gie! Reg-gie!” Expect this to continue against a shaky Bears defense. 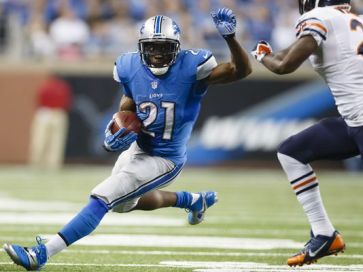 Eddie Lacy vs. Philadelphia Eagles: He’s scored double-digit points in each of the last four weeks, and without Aaron Rodgers on the field, expect him to do it again.

Zac Stacy at Indianapolis Colts: While Stacy is questionable at the moment, he should keep up his streak as well in this upcoming game if he plays.

Running Backs I Hate in Week 10

BenJarvus Green-Ellis at Baltimore Ravens: Giovani Bernard got the red zone carries and cashed in. That’s all that needs to be said.

Rashad Jennings at New York Giants: The 28 year old got his shot when Darren McFadden went down with injury. But don’t expect greatness against a team that has done nothing better than stopping the run.

DeAngelo Williams at San Francisco 49ers: The return of Jonathan Stewart has taken away many carries from Williams and so he’s not such a great option at the moment.

Wide Receivers I Love in Week 10

Keenan Allen vs. Denver Broncos: In what has been one of the biggest surprises of the season, Allen has helped make the Chargers offense electric. He’ll continue again this week.

Hakeem Nicks vs. Oakland Raiders: Nick Foles did throw seven touchdowns against this defense last week. I believe Nicks is due for a big game.

Wide Receivers I Hate in Week 10

Cecil Shorts at Tennessee Titans: There will be more coverage on Shorts this weekend, as Justin Blackmon is suspended.

Mike Wallace at Tampa Bay Buccaneers: Going up against Darrelle Revis on Monday Night Football is not a favorable matchup for Wallace, who hasn’t scored since week two.

Marvin Jones at Baltimore Ravens: If Dalton struggles, so will Jones. I mean, you can’t throw it to yourself, right Hakeem Nicks?

Tight Ends I Love in Week 10

Antonio Gates vs. Denver Broncos: Gates is ranked the number two wide receiver by Matthew Berry this week. Expect Rivers to find him for a TD or two.

Garrett Graham at Arizona Cardinals: The Arizona defense has not been able to contain tight ends this year and so Graham could make for an interesting play.

Jason Witten at New Orleans Saints: Witten is coming off of a great week against Minnesota last week. This one is expected to be a shootout, so expect Witten to be heavily involved.

Tight Ends I Hate in Week 10

Jared Cook at Indianapolis Colts: Cook had a good week last week, but it was his first since week one. The Colts are in the top 10 against tight ends this year so it’s not really a good play.

Defenses I Love in Week 10

Tennesee Titans vs. Jacksonville Jaguars: They are playing the Jaguars so…

Pittsburgh Steelers vs. Buffalo Bills: With EJ Manuel first coming back from injury, don’t expect a great game from him.

Defenses I Hate in Week 10

Chicago Bears vs. Detroit Lions: The Bears just haven’t been themselves this season and now they have to play a scary Lions team.