Coming off their first winning season in 20 years, the Pirates are finally in the position of not only trying to add players during the off season, but keeping their own.

One player who we already know may not return, is fan favorite and veteran leader, A.J. Burnett. The Pirates officially declined to make their former ace a qualifying offer on Friday. Pirates GM Neal Huntington went on 970 ESPN Radio in Pittsburgh, and stated they did not make a qualifying offer to Burnett because they simply, “could not afford the $14.1 million hit to their 2014 team budget”. 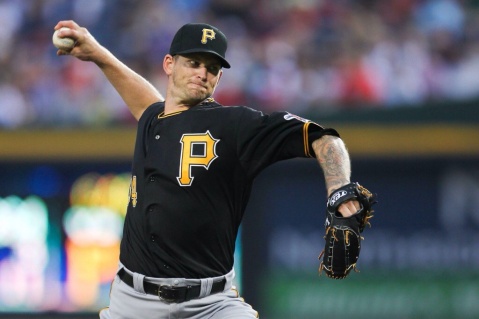 Huntington went a bit deeper when addressing the non qualifying offer, stating, “”It’s not where we value A.J. Burnett, it’s how do we build a championship team in the big picture. And as we look to fill some of the other gaps that we have, or we look to upgrade some of the other spots we feel we’d like to upgrade and should upgrade if possible, we felt that $14MM in one player was a bit steep for us.”

Does that mean Burnett will not be back in a Pirates uniform next year? The answer is no. Pittsburgh could be pinning their hopes that Burnett liked his success and surroundings in Pittsburgh so much, that he will sign a one year deal in the $10 million dollar range. The pitcher went on record this past season when he said he would either retire or return to Pittsburgh in 2014. If he holds to that train of thought, maybe the Pirates can sign him at a discounted rate. That may be a gamble on the Pirates part at best though. Burnett is sure to get larger offers from other teams during the upcoming free agency period.

While the Burnett situation will eventually play itself out as the off season goes on, the Pirates will add to payroll. Where they add that money is the question. Let’s take a look at the Pirates position by position and look at what needs they must address.

First Base: For much of the season, the Pirates platooned Garrett Jones and Tony Sanchez. While Jones was useful against right handed pitching, his power numbers and average against left handed pitching dropped dramatically. Sanchez was average at best. The acquisition of Justin Morneau in September was an upgrade, but Morneau did not perform up to the expectations of the Pirates during their playoff run. Morneau could not hit one ball out of the park during his short tenure and his average was nowhere near his career stats. If the price is right, Pittsburgh could take another flyer on Morneau, but only at the right price. Jones’ career in Pittsburgh may have come to a close, while Sanchez may be tendered and could be a useful bench player. An upgrade at first base is a must though. There are some Mark Trumbo trade rumors. He would be a perfect fit, but at this point it appears to be just that, rumors.

Second Base: Neil Walker is currently under contract and rumors continue that the organization and Walker are working on an extension. While the Pittsburgh native is inconsistent at times, when healthy he puts up solid numbers and should give you 15-20 home runs a year and hit for .270 average. No need to upgrade at that position.

Shortstop: This is a spot that has plagued this franchise for years. It seems the Pirates have had no luck upgrading this position. Clint Barmes was signed two years ago, most likely due to his affiliation with Clint Hurdle in Colorado. Barmes is one of the best defensive players at his position, but his offensive numbers, are just that…offensive. Towards the end of the 2013 campaign, Jordy Mercer took over the bulk of the playing time at the position. While Mercer’s offensive numbers are an upgrade, he is a defensive liability and those liabilities showed, contributing to a number of key errors, costing his team important games down the stretch that could have also ended the hopes of a central division title. This is a major position where the organization MUST upgrade during the off season.

Third Base: Pedro Alvarez is set here. While he may eventually move to first base a few years down the road, there is no need to change things up now. He led the NL in home runs, and while the Pirates would like him to bring up his average and cut down his strikeouts, he is young enough and will have a number of seasons to improve on those stats.

Catcher: Russell Martin was everything the Pirates thought he’d be. Outstanding defensively. Valuable veteran to work with some of the young pitchers on the staff. Gave them a few walk off hits and had some clutch home runs as well. Look for fan favorite and decent back up Michael McKendry to return as the backup.

Pitching: Look for the Pirates to upgrade their starting rotation with or without Burnett. Wandy Rodriguez will be returning as the Pirates plan to pick up his option. His only question is his health. If he can remain healthy, that is a big plus for the rotation. Charlie Morton had a very good bounce back season after Tommy John surgery. He will be penciled in the starting rotation potential future all star Gerrit Cole. This could also be the season that another highly touted prospect cracks the Pirates rotation. Former first round pick, Jamison Taillon appears ready to take the next step in his career. If not in the rotation opening day, a June call up is likely. The need for another veteran starter is necessary though, and look for Pittsburgh to address that.
The bullpen should be set. As long as Jason Grilli can remain healthy, he will be the team’s closer and Mark Melancon return to set things up for Grilli in the 8th inning. Adding Justin Wilson, Tony Watson, and Vin Mazzaro, to that list, the bullpen should be one of the best in baseball again in 2014.

Left Field: Starling Marte will be the starting left fielder and should be for a long time. While he does tend to strikeout more than the team would like, he is still learning and his talent out weighs any negatives. Marte has great defensive skills, and a very strong arm. One of the fastest players in the game and has some power and will eventually be a 15-20 home run type player. Marte is still a raw talent, but has the potential to be one of the best left fielders in the National League.

Centerfield: Not much to say here. Potential MVP Andrew McCutchen is one of the best players in the game. Obviously no need for any upgrade here.

Right Field: This is the position that must be addressed as well. The Pirates tried many platoons at this position, and until Marlon Byrd was acquired late this past season, it was one of the Pirates weaknesses if not their biggest. Jose Tabata, Garrett Jones, Tony Sanchez, Andrew Lambo, Travis Snider, and possible a few lucky fans tried to take over that position, but no such luck. Right field is where you can expect a major upgrade. Marlon Byrd may be the answer, but he comes with a few questions. With his surprise season, does he price himself out of the range the Pirates are willing to commit to? Was Byrd’s season a fluke? Will his age (36 years old) catch up to him? If the contact demands based on years and amount are acceptable, look for the Pirates to possibly try and re-sign Byrd. They should and will do their due diligence and look elsewhere first, just in case they can find a younger bat with a more consistent history.

It will be an interesting off season for the Pirates. It will be an important one too. The team is coming off a major season and they won the fans back in a football & hockey town. It’s now up to Neal Huntington to make sure he keeps the momentum going in 2014.

Doug Tyburski is a graduate of Nassau Community College & Suny Stony Brook. He has always been a huge sports fan and his favorite team’s include the NY Islanders, Pittsburgh Pirates, Philadelphia Eagles, and Brooklyn Nets. You can follow him on twitter at @dtybur