AFC Midseason Recap and Predictions (2 of 4)

In part one of the midseason recap and predictions, the AFC East was covered.  Now we will move on to the AFC West:

This prediction may seem controversial given the current standings of the division. The battle for the top spot really is a two horse race at this point. The Broncos and the Chiefs seem poised to battle it out until the end. However, I give the edge to Denver for reasons to be explained later in this article.

The Broncos have far and away the NFL’s best offense: first in points scored, first in total yards per game and first in passing yards per game all thanks to MVP candidate Peyton Manning. This is a team that made the AFC Championship last season and has come back even better, with even more weapons both offensively and defensively. In addition to Demaryius Thomas and Eric Decker, Manning now has Wes Welker and rookie tight end Julius Thomas. The defense gained Shaun Phillips to help the pass rush along with Von Miller, who recently returned from suspension. This has helped the defense compile 22 sacks on the year. The Broncos currently have a 7-1 record heading into their bye week. 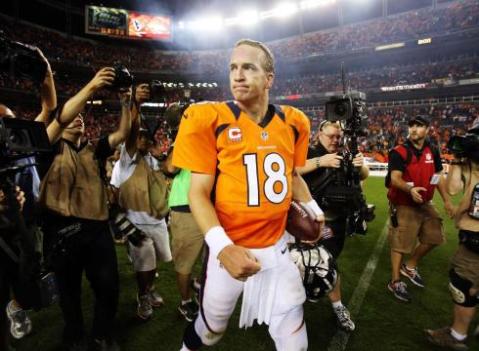 Peyton Manning hopes to walk off as a Super Bowl champion at the end of the season. (Via US Presswire)

The Kansas City Chiefs on the other hand boast a very powerful defense. They rank first in the NFL in points allowed, fifth in total yards allowed and fourth in pass yards allowed. They are arguably the biggest surprise team of this season after coming off a two win year. With a new quarterback in Alex Smith and a new coach in Andy Reid, the Chiefs now sit in first place at 8-0. Justin Houston and Tamba Hali have 20 sacks combined along with five forced fumbles. Smith, Jamaal Charles and Dwayne Bowe lead the offense. Smith has continued his consistent play from last season with nine touchdown passes and only four interceptions. However, despite the undefeated start, this is a team with some flaws. Their last two games, against disappointing Browns and Texans teams, were won by only a combined six points. Jason Campbell and Case Keenum nearly led their teams to giving KC their first loss. How can we expect them to keep Peyton Manning in check two times in the next four weeks if Campbell and Keenum give this defense trouble? That said, look for KC to easily lock up a Wild Card birth and a potential third matchup with Denver in the postseason.

The San Diego Chargers have comeback from a disappointing season with a very impressive first seven games. Their 4-3 record would be good enough for better than third place in almost all other divisions. Yet, because of the two powerhouses at the top, that’s where they find themselves. Quarterback Phillip Rivers is an early Comeback Player of the Year candidate and has thrown for 15 touchdowns and only five interceptions after a 2012 season that saw him account for 30 total turnovers. Rivers and tight end Antonio Gates have reestablished the connection that they have had for many years and Gates leads the team in receiving yards. The defense, though allowing yards, is still sixth in the NFL in points allowed. If the Chargers continue their strong play, they can find themselves in a position for a Wild Card position as well.

The Oakland Raiders have seen quite a bit of disappointment in the past few seasons. Though they currently sit in last place with a sub-.500 record (3-4), there are many reasons to have high hopes for the future. One of these reasons is Terrelle Pryor. In his first season starting, Pryor has shown that he is capable of being a dual threat quarterback and can lead this team to many wins as he matures. Pryor is supported by a corps of young, fast wide receivers including Denarius Moore and Rod Streater. If the Raiders can manage to get Darren McFadden running in the way that he did last year, look for them to be competitive in the second half of the season, and potentially play spoiler for other teams’ playoff chances.

The AFC West has emerged this season as potentially the best in the AFC. Both the Chiefs and Broncos seem primed for a playoff run, with the chance of being joined by the Chargers. The two upcoming matchups between Kansas City and Denver might prove to be the key to the tight race for first place and San Diego’s consistency will be key for their Wild Card push. It’s important not to count out Oakland as Terrelle Pryor continues to develop as a quarterback who can win with his arm or his legs.