NFL Network has been celebrating their 10th year on air in style with special events and all sorts of fun. They are also in their second full year of doing Thursday Night Football for the entire NFL season. However, they don’t seem to be getting many good games to cover. This continues tonight as the Washington Redskins (3-5) head to Minnesota to take on the Vikings (1-7).

The Redskins are starting to turn things around. Two weeks ago, they took the Broncos to the extreme, in what ended up just being a 4th quarter breakdown of the Redskins and led to their demise. Last week they beat a favored San Diego Chargers team after going to OT and winning in the extra period. Now they have a chance to string two wins together in Primetime. Robert Griffin III has been playing progressively better since coming off his ACL injury last season and the team overall is starting to look like the playoff team of last year. 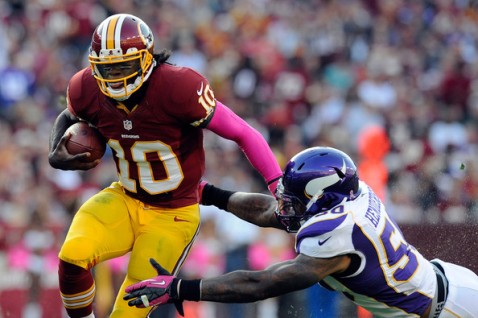 The Vikings seem to have no upside. They have gone through three quarterbacks, and are now going back to their first in Christian Ponder. No part of the team has looked particularly strong, including the man who many consider the best running back in the game, Adrian Peterson. They could have possibly picked up some momentum though after their last game, when the Dallas Cowboys won on a last minute drive by Tony Romo and the Cowboys offense.

On the short week for both teams, the Redskins will prevail over the Vikings 35-24.