Comeback Player of the Year 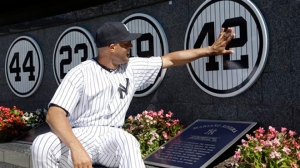 The Sandman adds to his hall of fame career. Coming into the 2013 season we weren’t even sure if we would see Rivera at all. Coming off of knee surgery at age 43, some people thought he would retire in 2012. Others felt that even if he did come back he wouldn’t be the same old Mariano. They couldn’t have been more wrong. In his final season, Rivera posted 44 saves and a 2.11 ERA, both better than his career averages. Mariano, much like a fine wine, just gets better with age. Of course we will not be seeing Rivera closing games for the Yankees anymore. However, he left us all with the message that if you want to succeed enough, age is just a number and injury just a minor speed bump in life’s successes. There really was no other option for this award.

Rookie of the Year

There was always a lot of hype around Wil Myers. However, when the Tampa Bay Rays acquired him in a trade for their ace pitcher, the pressure mounted significantly. Myers only played for just over half a season, but boy did he make an impact. Myers led all rookies in doubles (23), extra-base hits (36), OPS (.831) and RBI (53). In addition to that Myers added 13 homeruns, and a .293 batting average. He helped to lead the Rays to a playoff birth where they would lose to the Red Sox in the ALDS. And he’s only going to get better as his career goes on. Myers is actually the third Rays player to win the award in six years, following the footsteps of Evan Longoria and Jeremy Hellickson. Look for Myers to develop into a top-level outfielder.

Manager of the Year

Let me take you back to two seasons ago. The Red Sox had just gone through one of the worst late season collapses of recent memory. There was a potential scandal looming with the rumors of beer and chicken wings in the clubhouse. Francona was basically run out of Boston by an angry mob. After a year in the studio, Francona decided it was time to return to the dugout. The Cleveland Indians were coming off a season where they finished 26 games under .500 and 20 games behind the division winning Tigers and 25 games out of the Wild Card. They were certainly a team in need of a fresh start and a new face. Francona had won two World Series titles in Boston and the Indians upper management felt that this experience with winning teams could take them into October. The Indians won 92 games this season, claiming the top Wild Card spot and only barely missed winning their division. The 24 win turnaround tied a franchise record. This turnaround was sparked by Francona’s appeal and ability to recruit free agents and find players that he thought would provide a good trade value. This was a hotly contested award between Francona and his old pitching coach and Red Sox manager, John Farrell but in the end the voters deemed Francona the more worthy recipient. (It is worth noting that voting takes place before the playoffs. Whether that had an impact on the results we can never know.)

The second Tigers’ pitcher to win the award in three seasons, Scherzer earned 28 out of 30 first place votes. It’s pretty hard to argue with this decision. Scherzer won his first 13 decisions before taking a loss and ended the season at 21-3 (only 8-3 in those last 11 decisions. Must have got in a slump). He was the only pitcher to reach the 20-win plateau this season. His ERA was 2.90, which is an impressive number for any pitcher in any given season (considering that 3 or less runs in 6+ innings is a “quality start”). He was also the only starter in the MLB to allow less than a base runner per inning (.97 WHIP). He also had 240 strikeouts, for a rate of 11.078 per nine innings and an average of 6.22 hits per nine innings. In addition ,Scherzer led the AL in wins above replacement at 6.2, which would have made a huge difference in the playoff race. Scherzer was no doubt the best pitcher in the AL this year and at only 28 years old, look for him to continue to climb in the rankings over the next few years.

And now for the debate that has neither end nor answer: Mike Trout vs. Miguel Cabrera. This is now the second year in a row that Cabrera has beat out Trout for this award. It’s a question of offensive prowess vs. five-tool player. The answer however, does get clearer, at least for this season, if you look closer at the season. Cabrera led the MLB in batting average and broke his personal record by hitting .348, 18 points higher from his historic triple crown last season. He hit the same 44 homeruns as in 2012, and would have led the league in that category as well had it not been for the emergence of Chris Davis. He had 2 less RBI than last season but still put up the ridiculous amount of 137. He also led in OBP (.442) and slugging percentage (.636). And he did it all while injured. Cabrera had been suffering from multiple injuries dating all the way back to June. The most serious of these was a groin injury that required surgery this offseason. Had he not been injured, it’s very possible we could have been talking about a second straight triple crown. That is an argument that is just about impossible to look past. It’s true that Trout has the advantage in defense, stolen bases, extra-base hits and some of the new sabermetrics that analysts and scouts like to look at. However, many people consider the success of the team as a whole an important factor in MVP voting and in that aspect the Tigers were much better than the Angels. Looking at all of these factors it is clear that Cabrera deserved to win, and with a greater margin than his victory last year. And he’s only 30. Cabrera will be giving pitchers nightmares for many more years to come.