The New York Mets spent money on a free agent! I repeat, the Mets have spent money! It was reported last week that the Mets signed outfielder Chris Young (no, not the one that pitched for them a few seasons ago, but the other one). Young played last season with the Oakland A’s but spent seven of his eight seasons with the Arizona Diamondbacks. Young is a right-handed hitter who has the ability both to hit for power as well as use his speed on the base paths. However, in the past two years, Young has struggled. He hit .200 and .231 in 2013 and 2012 respectively while combining for 26 homeruns and 81 RBI. In 2010 alone he hit 27 homeruns and 91 RBI with 28 stolen bases. His past two down seasons aside, Young still has career averages of 24 homeruns, 73 RBI and 20 stolen bases. The Mets are hoping that he can return to these kind of numbers and give a boost to an outfield in need. 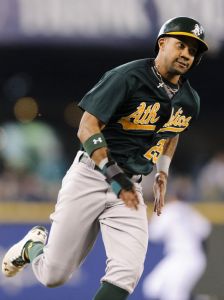 I don’t think this is a bad deal for the Mets. That said, it is not the only move to make and does not answer every outfield question. Young is a solid defensive outfielder with more assists in his career than errors. It’s unclear where he will be playing but he has experience at all three outfield spots, though most of that in centerfield. Even in his subpar seasons Young has had success against left-handed pitching making him at worst a platoon outfielder. At best, Young will be able to regain his 2010 form and become a significant part in a Mets lineup in need of both power and speed.

One thing that I think was a mistake for the Mets was the price. Young signed for one year, which limits risk and was a technique we saw last year with Marlon Byrd. This allows the Mets not to be tied down to a long-term deal with a player who may not contribute. However, the one-year will cost the Mets $7.25 million, making Young the highest paid player that isn’t named David Wright. This is a large monetary commitment to a player who could end up only being a platoon outfielder.

All in all, this move has a chance to pay-off for New York if Young can return to All-Star form. However I would look for them to still sign another outfielder, possibly a left-handed bat in case a platoon is needed. This lineup is hardly a finished product and much of the roster is still in flux. However, this is a nice fairly low-risk signing in terms of years and it is good to see the Mets getting involved so early in the free agency process when last year they didn’t sign a free agent until almost February. I would look for a few more free agent signings from this team as well as a potential trade or two in the works as the team continues to look to the future, though the a much nearer future than in years past.