Last week, the roster for the U.S. Men’s Olympic ice hockey team was announced for the 2014 Winter Olympics in Sochi. There are plenty of new faces on this team and some confusing exclusions. Hopefully the new additions as well as the thirteen returning players from 2010 can improve on the silver medal effort in Vancouver.

This year Team USA will feature five forwards making their Olympic debuts. T.J. Oshie, Max Pacioretty, Derek Stepan, James van Riemsdyk, and Blake Wheeler. At 27, Oshie and Wheeler are the oldest of the new crop of forwards. Pacioretty, Stepan, and Wheeler are statistically having the best NHL seasons of the new forwards, each just under a point-per-game. My favorite addition here is T.J. Oshie. His physical brand of hockey and goal scoring make him a complete power forward despite his average size. 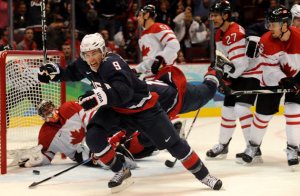 Three active forwards are missing from 2010: Jamie Langenbrunner, Ryan Malone, and Bobby Ryan. Langenbrunner is currently a free agent and Malone has struggled this year with only nine points in 27 games. But with 18 goals and 18 assists through 44 games, the most puzzling omission for any position is Bobby Ryan. He was criticized by team management for not playing with the intensity they felt was needed. For whatever the reasons, his offensive skills, and those of Jason Pominville and Kyle Okposo with 18 and 17 goals respectively, were not enough to make the cut. The coaching staff was obviously looking for more well-rounded players and felt sacrificing scorers like these was worth it.

There are six new additions to the defensive core: John Carlson, Justin Faulk, Cam Fowler, Ryan McDonagh, Kevin Shattenkirk, and Paul Martin. Excluding Martin, all new defensemen are under 25, bringing some youth to the roster. Each of these new players brings a nice balance of offense and defense to the table, a shift away from the more offensive minded defensive group of 2010.

Chris Drury and Brian Rafalski have retired since the last Olympics. Active defensemen missing from the 2010 roster are Tim Gleason, Ryan Whitney, Erik Johnson, and Jack Johnson. Both Johnson’s were on the last Olympic roster, were highly touted first round draft picks, and could be considered top tier defensemen in the NHL. Their exclusion from the roster is an interesting choice. Other defensemen I thought had a chance were Kieth Yandle and Dustin Byfuglien. However, Yandle brings nothing more than other defensemen on the roster and Byfuglien is often knocked for sacrificing his defensive game for his offense.

Jimmy Howard will replace Tim Thomas as the third goalie. Statistically, Howard has no edge over Thomas this season. Both Ben Bishop and Cory Schneider have the edge statistically over Howard and should have at least been considered for the roster spot. All I can think of is Howard’s NHL playoff experience. His 42 playoff games are more than Bishop and Schneider combined. That high-pressure experience seems to be more valuable to the coaching staff than this season’s NHL stats.

Team management knows they made some interesting choices. Team general manager David Poile addressed this when the team was announced: “We did not pick the 25 best players, we picked the 25 players we thought gave us a chance to win the gold medal.” We’ll have to wait and to see. The US plays its first game Feb. 13 against Slovakia.

Nick Vespasiano is a senior English major at St. Olaf College and aspiring sports writer. He was raised in Minnesota, favorite teams are the Vikings, Wild, and Twins. Favorite athletes are Randy Moss and Jaromír Jágr.