Though all players would have liked to have been playing on February 2nd, February 1st proved to be more exciting for most. The NFL announced this season’s awards at their annual NFL Honors ceremony in New York. Many players had incredible seasons and several awards were hotly contested. Here are the major winners:

Lacy was drafted by Green Bay out of Alabama and provided a spark that the Packers desperately needed. He added a whole new dimension to the team. Lacy provided a powerful running attack that helped the Packers to win the NFC North and reach the playoffs.

Richardson was taken as the Jets’ 13th overall selection and was envisioned as an important interior lineman in Rex Ryan’s defense. Richardson more than lived up to expectations and proved to be equally good at stopping the run and the pass. 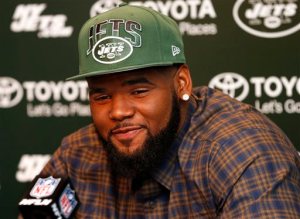 Sheldon Richardson broke into the NFL, taking home an award after his first season (Via AP)

It seems that every year, Charles is in the top 5 of everyone’s fantasy draft board and he shows no signs of slowing down. With the Chiefs having as much success as they did under Andy Reid, look for Charles to remain a top fantasy player for many years to come. Plus he went for five touchdowns in one game this season. You don’t see that from a running back every day.

Sometimes a new head coach can do wonders for a quarterback. Rivers is a perfect example of this. Following last season, many experts were wondering if his best days were behind him as Rivers had ranked among the worst in the NFL in turnovers. However, Rivers had a resurgence this season and led the Chargers to a Wild Card birth and a victory over the Bengals in the first round.

The Carolina Panthers started this season, as they had started many others before it: badly. The Panthers were 1-3 following Week 5. What happened next surprised everyone. The Panthers won 11 of their last 12 games and clinched the #2 seed in the NFC playoffs. A big part of that success was “Riverboat Ron”. Rivera beat out a group of very worthy nominees including Super Bowl winning coaches Pete Carroll and Bill Belichick.

Coaching isn’t the only thing that helped the Panthers on their winning streak. Luke Kuechly improved upon his remarkable rookie season and has solidified his name as one of the best linebackers in the game. In addition to being a tackling machine, Kuechly’s pass defense improved as well and he has emerged as a leader of a fairly young and dominating defense.

No real surprise here. Peyton had arguable the greatest season of any quarterback in NFL history. He set records for yards, touchdown passes and overall offensive points in leading the Broncos to the Super Bowl. Certainly in the discussion of greatest of all time, Manning proved that he is only getting better with age.

Manning received 49 of a possible 50 votes in winning his record 5th MVP award. Just another feather in the cap for the man who had the best offensive season of all time.