In a week that almost saw Peyton Manning on the duds list, there were some exciting moments in a busy week three. While the Seahawks took down the Broncos in a rematch of last year’s Super Bowl, none of Seattle’s players made either of my lists this week. Here’s this week’s edition of Studs and Duds:

Jones came into this matchup knowing that he was going to be Matt Ryan’s primary target, with Roddy White sitting out with a hamstring injury, and he was exactly that. Jones was fantastic, hauling in nine receptions for 161 yards and two touchdowns.

My first dud handed out for week three has to be Stephen Tulloch. The Detroit Lions linebacker had a great sack on Packers quarterback Aaron Rodgers on third down, in what was a very exciting moment in the first quarter. Tulloch was excited and opted to taunt rather than go back to the sidelines. While attempting the “Discount Double Check,” Tulloch leaps, lands awkwardly, and immediately goes down. As it turns out, Tulloch tore his ACL and will sit out for the rest of the season.

Andrew Luck was on point again, completing 31-of-39 passes. Luck completed passes to nine different receivers. The accuracy helped his stats, and he finished the day with 370 passing yards and four touchdowns.

Fantasy owner have been waiting for Thomas’ breakout game and they’ll have to wait another week. The number one Broncos receiver had four catches for 31 yards. He didn’t score any touchdowns, and heads into the bye week after an outing that was simply frustrating to watch.

The Falcons D/ST had themselves a phenomenal game, highlighted by a 62 yard, record-breaking punt return by Devin Hester. Hester scored his 20th career return touchdown, passing Deion Sanders for the top spot on the all-time return touchdowns list. The Falcons also had a 27-yard interception return for a touchdown and recovered four fumbles.

What ever happened to the Larry Fitzgerald of old? Well, that’s what I’ve been wondering after he was virtually invisible over the first three weeks. This week, he had just three catches for 34 yards. He has yet to find the end zone this season and that doesn’t spell well for his fantasy owners. 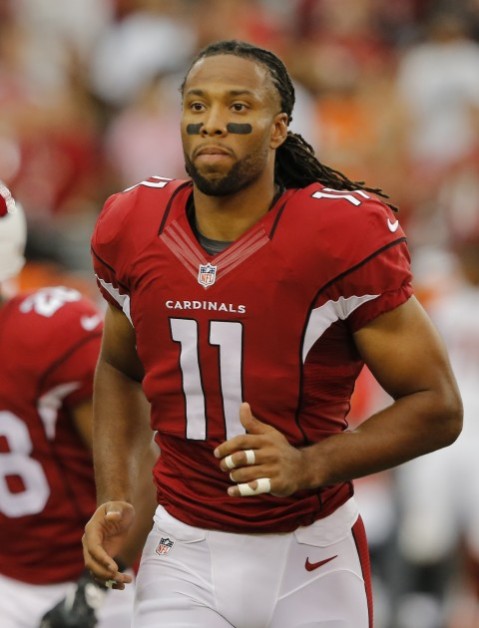 Larry Fitzgerald is nowhere to be found this season. (Via AP)

Fuller played a huge role under the bright lights of Broadway on a national stage. The rookie cornerback had an interception, two forced fumbles and seven tackles on Monday Night Football in a win over the Jets.

Yes, the entire team belongs here. The Bucs got absolutely smacked by the Falcons last Thursday. They allowed a whopping 56 points on a total of 488 yards, with 344 yards coming from the air. Tampa Bay will also need to hold on to the football, after fumbling four times. They’re going to have a rough time in the final two games of their road trip in Pittsburgh and New Orleans if they continue to play like this.

New game, same stud. Cousins has been great all season and this week was no different. Cousins threw for 427 yards and three touchdowns. If he keeps up to the pace that he’s at, Washington D.C. will have a lot to cheer about.

Both Maclin and Foles deserve credit in their win over Washington, so I’m placing them together. The pair hooked up for eight receptions and 154 yards. Foles finished the day with 325 passing yards and three touchdowns.