By Ryan Crawford
The 2014/2015 season has begun in exciting fashion and looks to continue that way. With a third of the season done already a lot of questions have emerged.  Analyzing this season as well as the future determines there is one team who has major issues. When you are a die hard fan, you generally see things through rose colored glasses. You grasp for good in anything you can. Even the most objective of fans have a tendency to overrate their own players. With that said, there will be no doubt that one group of fans will hate this author. But beware, I am just pointing out what you already know but just can’t come to grips with because of your blind loyalty.  You love your team and just want to see that cup raised on your ice. Unfortunately that will not be happening soon unless some drastic changes are implemented with your team. I would love to hear your reactions. Please keep the cursing to a minimum.

After years and years of being competitive but never one of the best, it is time for Ed Snider to tear this team down and start from scratch. This team is a complete mess from top to bottom.  When looking at the roster you find mostly overpaid underperformers. The Flyers are notorious for going out and overpaying players that their own teams have determined do not deserve the money they are asking for. Is there enough room to list them? Daniel Briere, Ilya Bryzgalov and Chris Pronger are gone but their buyouts and long term injury deals will haunt this team until the end of the current union deal as it gives them no maneuverability whatsoever. But the Flyers still keep bringing in bad contracts. Their defense is a shambles. Mark Streit is a power play specialist who can’t play defense anymore. He wanted four years and 18 million from the Islanders two years ago. The Islanders, who had very little on D at that point, thought he was way overpriced. So the Flyers gave him four years at 21 million. Not learning their lesson, the following year it was Andrew Macdonald’s turn. The Islanders offered him four years and 16 million, figuring he was at best a second pair defenseman who had played major minutes because of the lack of NHL caliber defensemen on the Island. So the Flyers paid him 30 million over six years. He’s at best a number four defenseman. Michael Del Zotto, the former Ranger defenseman was jettisoned by the Rangers because he could not figure out that his primary job was to play defense. The Nashville Predators had him for a half season and outright released him. Here come the Flyers to give him a guaranteed 1.3 million… For what?  Nicklas Grossmann, Brayden Coburn, Luke Schenn, Nick Schultz… Does not exactly strike fear into opponents.  The two goalies, Steve Mason and Ray Emery are pretty good but do not get any help from the porous defense 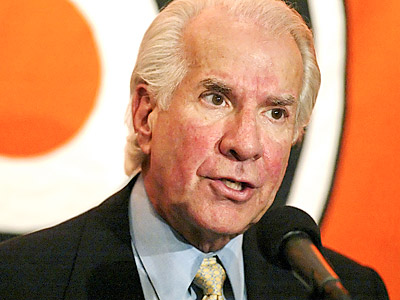 Does Ed Snider have to start from scratch? (Via AP)

The forwards have a little depth but Ed Snider has seen there is no secondary scoring. See his outburst the other night for proof of that!  They have Claude Giroux, Jakob Voracek, Wayne Simmonds and Brayden Schenn. What about RJ Umberger, Matt Read, Scott Laughton, Zac Rinaldo? 4 goals between them in the first 25 games! Vincent Lecavalier? Bought out by Tampa only four years into an 11 year 85 million dollar deal. Here come the Flyers to bestow a five year 22.5 million dollar gift upon Vinny. And what has Vinny given the Flyers in return? A whopping 43 points the past two seasons and a healthy scratch early in his second season with the team. Way to get value guys! Sean Couturier was considered one of the top rated players in the 2011 draft but dropped down to the Flyers at pick number eight because some teams were concerned about his scoring and viewed him as a third liner. Well he made the Flyers as an 18 year old and has become the third line player many expected.

Should we look into the trade market? Do you have faith in the Flyers top brass making trades? Who do they have that other teams might want? How has James Van Riemsdyk for Luke Schenn worked out?  Wait you say, “we have a farm system.” Virtually every season for the last 10, the Flyers have been ranked among the bottom handful of teams in the league. This year they have moved all the way up to 21st on HockeysFuture.  Flyer fans will tell you about Scott Laughton and Sam Morin but there is very little depth in their system and we have not seen a major Flyer draft coup since Claude Giroux in 2006. Other than Giroux, Van Riemsdyk and maybe Luca Sbisa, no other Flyer draft pick since 2004 has emerged as a top 6 forward or a top 4 defenseman at the NHL level.

For this team to improve they will need to part with a major asset or two. They have Giroux, Simmonds and Voracek. Brayden Schenn has value as well.  If they can accumulate draft picks or prospects for their bad contracts they should jump at the chance. Lecavalier and the entire defense should be up for grabs. If Couturier can bring back a prospect with a bigger upside I would move him too. They will need to develop the few prospects they do have and really score big with their expected high draft pick this season. If a few trades are made to jettison veterans for prospects and picks then they might have figured it out. If you see them trade for a veteran or two you will know they are the same old Flyers and expect more of the same.