Here’s some tips as your fantasy football playoff race heats up in week 11:

Starting Oakland Raiders wide receiver Amari Cooper this week will be vital to your team’s success, and I’ll even name him my Start of the Week. Cooper has been an extremely reliable option at wideout thus far, and the last few weeks are proof of that. In his last three weeks, Cooper has been targeted 31 times. This number makes it very intriguing to play him, considering the recent success of Raiders quarterback Derek Carr (who should be started as well). The Detroit Lions defense have given up at least 73 yards to seven out of the nine top receivers they’ve faced this season, so Cooper is expected to have a big day. 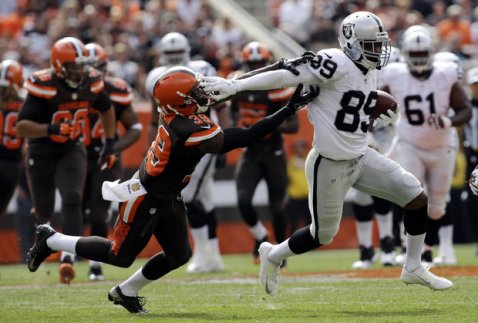 It’s been a while since Danny Amendola was a reliable fantasy wide receiver option. You’d have to go back to his days in St. Louis to compare the hype that he’s been getting this week. Amendola will have the opportunity to return that level after the losses of pass catching running back Dion Lewis and wide receiver Julian Edelman. This obviously gives a major boost to a player like tight end Rob Gronkowski, who will certainly see an increase in targets. I’m looking at Amendola to step up though, especially after having 10 catches last week. I’d definitely play Amendola as a flex this week.

This week marks the return of Dallas Cowboys quarterback Tony Romo to the starting lineup. Not much to say here. He’s going to have a nice day against a struggling Miami Dolphins team.

Indianapolis Colts wide receiver Donte Moncrief is my buyers beware player of the week this week. Of the five touchdowns that Moncrief has this week, every one has been from quarterback Andrew Luck, who is prepared to come back in mid-December. The last time that Matt Hasselback started for the Colts, Moncrief had just one catch. Plus there’s the fact that the Falcons have been great against opposing wide receivers. I’d keep Moncrief on the bench, as you probably have a better option.