So far this NFL season has been full of offensive firepower and high scoring games, which translates to BIG fantasy points. There have been standout individual performances (Calvin Johnson- 329 yards receiving, 1 TD or Peyton Manning- 462 yards passing, 7 TDs), and surprising seasons too (Andy Dalton ranked #6 in points among QBs, and Knowshon Moreno who has outscored every other RB/WR except Jamaal Charles.) This article is going to give you my opinion on who I think has performed the best comparative to their value so far, and who you can look out for in the future and during the playoff push. Remember, this is MY opinion, so you can take it or leave it as you wish. So here’s this season’s fantasy dream team:

Let me explain, Peyton shouldn’t be anywhere else on the list of best fantasy QBs this season. He’s been consistent, he’s produced touchdowns and yards, and he hasn’t turned it over. He has exactly what you need to dominate a league and achieve ultimate bragging rights. Rivers has been sort of under the radar this season, because, well, that’s what happens when you’re on the Chargers. He’s quietly thrown for over 400 yards 3 times, and only has a total of 5 turnovers this year. In my league, where he went undrafted, he was the best pickup of the season so far at ANY position. Brady on the other hand, has been the opposite. He has had difficulty gaining chemistry with his new, rookie receivers Kenbrell Thompkins and Aaron Dobson, but he has his savior in Rob Gronkowski who is back from his surgery and adds a new threat and more receiver depth on this roster. 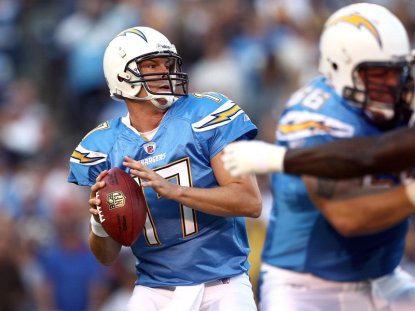 Jamaal, oh Jamaal. He hasn’t done anything wrong this year consistently getting at least 16 carries and gaining at least 100 total yards of offense in each game so far, PLUS 8 total TDs. Moreno has had similar consistencies to Charles with 9 total TDs, and around 15 carries a week in support of Peyton. The disappointment in the running back spot comes from none other than CJ Spiller. Before the season I thought that he was going to excel in Buffalo and help push them to the playoffs, but I couldn’t grab him in my league, and now I’m thankful.

Why not Megatron? Because he had one game with 36 ESPN standard fantasy points that really influenced him in terms of points. I have to give the starting position to Dez because of his consistency so far, but for the rest of the season, expect more domination from Calvin. Josh Gordon, although he missed the first 2 games of the season with a suspension, has been proven to be any Browns QB’s favorite target excelling with all Hoyer, Weeden, and Campbell throwing him the ball. Cobb can’t help his injury, but he had high expectations coming into the season, and only played 2 full games.

Jimmy Graham has been simply exciting this season making catches look easy, and making his good buddy Drew Brees look good. On top of that, he had a 5 game stretch to open up the season where he had 93 points total (which would still lead the league now). Cameron has been a welcome sight for most fantasy owners who thought he would have no opportunities because of the Browns, but he has grabbed 6 TDs this year and is averaging 11.5 points per game, which isn’t too shabby for a free agent find. Now, Gronkowski is interesting because reports were saying that he could have came back week 5, but made his first appearance in week 7. Since then in his 2 games of action Gronk has 13 total points and no touchdowns which isn’t exactly comforting to owners who drafted him in high/mid rounds.

The Chiefs have been unstoppable on defense causing turnovers, not allowing points or yards, and just wreaking havoc in the backfield with their premier edge rushers Justin Houston and Tamba Hali. Houston is second in the NFL in sacks with 11, and Hali is tops in the league with 4 forced fumbles. The Broncos haven’t lived up to their stellar defense from last year, and have taken part in quite a few shootouts of offense vs. offense. Expect Von Miller to be the main factor on their future success.

When it doubt, Matt Prater it out. He has gotten an incredible amount of points from just PATs and is not going to stop if Peyton keeps it up. I have no idea why Sea bass isn’t performing like the machine he was last year, but with a paltry 36 points through 8 weeks, he is the worst kicker in the NFL who has maintained a starting job.

Who to watch out for:

QB: Matt Stafford- He doesn’t have a tough schedule ahead of him and has many weapons.

RB: Gio Bernard- A rookie on the rise has had a few good games this season that could potentially give him the full time job over the Law Firm in Cincinatti.

TE: Jordan Reed- RG3 has found a liking to this guy as a main target. Watch out.

D/ST: Panthers- Despite the trading of Jon Beason to the Giants, these guys are playing solid football and just might surprise a few people with a playoff push

K: Matt Prater- He’s just going to keep on kicking these extra points until the season is over

Let me hear what you guys think about my picks in the comments and leave any of your own if you want. Just remember that there’s still a lot of football left to play.

Josh Halilej is a die hard fan of both the Jets and the Mets, and is an avid fantasy sports player. He participates in leagues for baseball, basketball and football. You can follow him on twitter at @Mrmet2323