A little late to preview this but still, this game looked evenly matched when the Bengals should have come out and dominated.  However, this game turned very defensive and that showed as DE Cameron Wake came out in the extra period and sacked QB Andy Dalton in his own endzone and gave the Dolphins a much-needed victory.

The Chiefs and their lack of a difficult opponent streak is continuing, which will help them remain undefeated before their highlight matchup versus the Denver Broncos.  The Chiefs should be able to play their average game and take care of business easily against an inconsistent and injury plagued Bills squad.

What was marked as an easy Atlanta victory in the preseason is now a game that they might not even be able to handle.  The Panthers have been playing very strong football, led by QB Cam Newton who is having a fantastic season.  With the Falcons as injury plagued as they are, it seems hopeless for them to take this must win game.

No matter what you say, the Cowboys are still a very strong team.  QB Tony Romo is having one of his best seasons so far and his supporting receiving cast is strong.  The one question mark on that offense is the running game, which is dealing with an injured and inconsistent Demarco Murray.  The defense has been decent for most for the year and it won’t matter with the atrocious Vikings offense, defense…everything.  The only bright spot is of course last season’s MVP, RB Adrian Peterson.  But that, like it has all season, will not save the Vikings atrocity of a season. 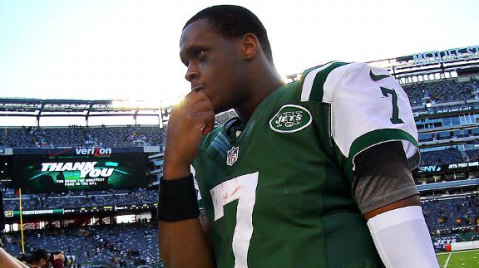 The Jets have followed a pattern.  They look like a playoff caliber team on an odd week, and the worst team in the NFL on even weeks.  According to the schedule, it’s an odd week.  Rookie QB Geno Smith has looked fantastic on odd weeks and has showed great poise in the pocket throughout his brief career.  The Jets defense needs to step up, but the front 3 for the Jets (Sheldon Richardson, Damon Harrison, and Mohammad Wilkerson) has been fantastic all season and if the secondary plays up to their expectations, this is a game that Gang Green can bring home before their bye week.

The Rams proved something last Monday night versus the Seahawks.  They can play serious defense.  With the Titans struggling, the Rams should be able to take advantage with their stellar defense and the increasingly better running game led by RBs Zac Stacy and Daryl Richardson, they should be able to take this win.

The Chargers are probably the biggest surprise this season so far, besides their division rival, the Kansas City Chiefs.  QB Philip Rivers is having a comeback season this year, and RBs Ryan Matthews and Danny Woodhead have been playing their roles well.  To add to that, the Redskins have looked generally terrible all season.  Besides the heart stopping win last week versus Chicago Bears, QB Robert Griffin III and the Redskins are having a terrible season and the Chargers are not a team to help change that fact.

If the Eagles had a QB that could stay on the field, they would barrel over the Raiders.  However, even though QB Nick Foles is reportedly starting the game, no person can predict who will end the game.  QB Terrelle Pryor has proven it with his legs and has a somewhat decent arm.  After being able to produce against the Steelers tough defense last week, they should be able to do the same this week on top of the Eagles.

The Buccaneers will get points when the entire Seahawks starting lineup is on the bench celebrating.  Tampa is fighting for Jadeveon Clowney in the draft and that’s about all the success they will have this season.  And of all teams to play, the Seahawks are so dominant and seemingly unstoppable, they have no chance.  #drowneyforclowney.

The Ravens don’t look good, period.  They are a shell of last years team and it has showed everywhere on the field.  The Browns have left the past behind and are moving on to try and make a better future with young stars.  After almost coming out with the win last week versus the only undefeated team left, how can you not pick the Browns in this matchup?

The Steelers lost to the Raiders.  A team that seemed to have no promise, and they lost.  They have two wins and are playing like they deserve it.  On the other side, the Patriots are getting all their pieces back, headlined by TE Rob Gronkowski.  They are starting to get back in form and even though they do have key defensive injuries (Vince Wilfork and Aqib Talib) they should have no problem dealing with a weak Steelers lineup.

For everything the Steelers are doing bad, the Texans are doing 10 times worse.  The quarterback situation is volatile.  We all thought it was bad when they lost Matt Schaub, but that seems to have at least improved their offense slightly as they sink back to where they were when they were first an expansion team.  The Colts have had an opposite fate.  Andrew Luck has led this team to great success and they are hitting on all cylinders.  What should have been a hard fought for game by both teams before the season now has turned to what will be an embarrassment for a team that was heading so far in the positive direction, the Houston Texans.

The greatest rivalry in history is getting a new primetime chapter.  This chapter will not be one that Jay Cutler will be rereading, as he is still injured and out for this game.  This would be a great game, but with no Jay Cutler and the Packers being so offensively strong, the Packers should have no problem.  Aaron Rodgers continues to lose receivers in his offense, but replaces them just as fast and leads a seemingly unstoppable Packers offense, whose major reason for success is surprisingly the running game of rookie RB Eddie Lacy.  Lambeau Field will be loud on Monday night for a great end to a great week in football.

One response to “NFL Predictions Week 9”