For the diehards it seems so far, for the casual fan its just a few weeks away. For the Knicks, it has been an offseason with a large sense of relief as they were able to bring back superstar forward Carmelo Anthony. Last season could of easily been the most disappointing year that many fans have witnessed in recent memory. A team that finishes shy of making the playoffs with a player like Carmelo Anthony is simply hard to believe. 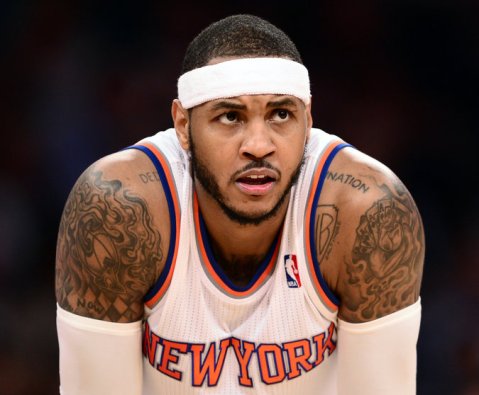 Carmelo Anthony hopes to lead the Knicks back to the playoffs after missing out last season. (Via NYT)

Somehow for this upcoming season, the Knicks fans around New York are expecting a season similar to 2012-13 when they won the Atlantic Division and beat the Boston Celtics in the first round and lost to the Pacers in the 2nd round of the playoffs. My question to you, Knick fans, is why should a team coming off of a 37-45 season, that has a rookie head coach in Derek Fisher, and didn’t do much to improve in the offseason have a higher expectation? Acquisitions like Quincy Acy, Samuel Dalembert, Jose Calderon, and Jason Smith adds more depth, yes. The addition of draft picks in Cleanthony Early and Thanasis Antetokounmpo is great too. But, I still can’t really see the team having much success.

The Knicks lost Tyson Chandler, Jeremy Tyler and Shannon Brown, and the team definitely improved. They didn’t improve like some other teams did, but I also consider a healthy Amar’e Stoudemire, and Andrea Bargnani improvement in the front-court as well. The improvement is not by much though. In due time, I believe that having Derek Fisher as head coach will work out eventually, but a lack of experience may hurt his chances this season.

On to prediction time. My Knicks season prediction is a bad start, ending in a good finish that will propel them into the playoffs. I think they’ll have the opposite record as last season and go 45-37, reaching the sixth spot in the East. They’ll give my predicted three seeded Washington Wizards a run for their money, but not quite good enough and fall in seven games. For those of Knicks Nation, good luck in 2015.

Jack Allen is a writer for dabuzzza.com. He is a fan of the New York Mets, New York Islanders, New York Knicks, New York Jets, Seattle Seahawks, Seattle Mariners, Queens Park Rangers, and West Virginia Mountaineer football and basketball. His favorite athletes are David Wright, John Tavares, Geno Smith, Allen Iverson and Charlie Austin. He is a very passionate and determined fan. You can follow him on twitter @JackAllen99.