Take It To The Bank: NFL Week Eight

Happy Halloween! We’ve taking the Take it to the Bank report this week and giving it a Halloween feel with today’s section: Trick or Treat! Use this section as you look to this week and beyond as you set your fantasy football lineups.

Yes, many people had Jamaal Charles in their running back slot and are looking to West to produce. Yes, West had a big game last week, rushing for 110 yards and a touchdown. Yes, I did say to pick him up (and he should be picked up), but I’m not that big on him. This player is not a RB1, and I’m not sure he’s a reliable RB2 option. You can’t judge a book by its cover, and you can’t judge West by one big game. He’ll probably have a good game this week, but don’t expect huge numbers every week.

Gurley owners that stuck through the thick and thin are now grinning at the results. Gurley has been the league’s most productive player, especially in an offense that has become run-heavy. Continue to enjoy Gurley having big games almost every week.

The Cowboys are an interesting story. Yes they took a heartbreaking loss to the Giants last week, letting the Giants return a kickoff for a touchdown just after tying the game. But they also found new life in running back Darren McFadden. With Joseph Randle possibly out for a few games due to violating the NFL’s personal-conduct policy, the Cowboys will look to McFadden, Christine Michael and Rod Smith. Flashback to a week ago when Jason Garrett planned on making Michael the starter. Yeah, so that didn’t happen, and you can look elsewhere for a better running back on your team. McFadden however is a flex play at best this weekend as the Cowboys welcome in the Seattle Seahawks, so don’t be tricked by last week’s big performance.

The Jets are another interesting story. The offseason changed everything for them, bringing in cornerbacks Darrelle Revis and Antonio Cromartie, along with wide receiver Brandon Marshall and quarterback Ryan Fitzpatrick. Many members of the New York media propelled them to Super Bowl contenders. Then the season came, and Geno Smith got punched in the jaw by his now-former teammate I.K. Enemkpali, sending the Jets predictions out the window. There was no way that Ryan Fitzpatrick could pick up the pieces right? Wrong. The Jets headed into New England last week at 4-1. They played till the final whistle and although they sit at 4-2, look at their schedule. Eight out of their remaining 10 games come against teams that are currently at or below .500 and that should be looked at closely. Fitzpatrick should be looked at if he’s still available in your leagues, and Brandon Marshall and Chris Ivory should be starting in your lineup. The defense should be starting most if not all weeks. If you want that sneaky play, look to Eric Decker, as teams are focused on stopping Brandon Marshall. 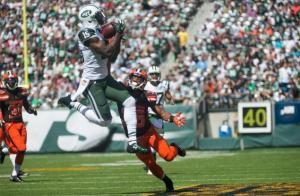 While I’d like to stick the entire NFC East in the tricks section, I’m not going to do that because I’m not that mean. But I will stick the Giants in here with the Cowboys because of their fantasy impact. I understand that the team is 4-3, but with a lot of tough teams (looking at you AFC East and Carolina Panthers) coming up on their schedule, it’s not really an ideal situation. I definitely do not trust any of the Giants running backs, and other than Odell Beckham Jr., I don’t trust any of their wide receivers. I’d consider Ruben Randle in deeper leagues, but only if you don’t have other options due to the bye week. Quarterback Eli Manning certainly cannot be trusted in fantasy leagues, compiling just 14 fantasy points in ESPN standard leagues over the last two weeks. I’d look elsewhere for impactful fantasy players.

So Antonio Gates came into the season off a four game suspension, and immediately made a major impact. Gates had two touchdowns in his first game back, and has had 90+ receiving yards in both games that he has played in. But with a sprained MCL, the Chargers looked to Ladarius Green and he has been contributing all season. Quarterback Philip Rivers loves to throw to his tight ends, and while Gates is taken in most leagues, Green isn’t so pick him up now.