Take It To The Bank: NFL Week Nine

Minnesota Vikings wide receiver Stefon Diggs has scored 43 fantasy points over the last three weeks, making him one of the most intriguing names on the fantasy football waiver wire. He’ll take on a St. Louis Rams defense that has a tough secondary. I’m not sure that this will be a huge outing, but Diggs should still be considered as a flex play.

Pittsburgh Steelers quarterback Ben Roethlisberger returned from a sprained MCL injury last weekend, completed 28-of-45 passes for 262 yards, with one touchdown and three interceptions Sunday against the Bengals.. Not such great numbers. I think that this week, Big Ben returns to his old self, and has a big day against an Oakland Raiders defense that has allowed the most passing yards in the league. Look for wide receiver Antonio Brown to have a huge day as well.

Headlines were made this week as the Denver Broncos traded two sixth round picks this week to acquire two time pro bowler, tight end Vernon Davis. This had me intrigued for the main reason that quarterback Peyton Manning loves his tight ends. Let’s take a look back. Julius Thomas had 24 touchdowns from Manning in his final two seasons as a Bronco. I think that can be Davis this season, and am highly attracted by the potential that this trade has. He does have two other tight ends on the roster to compete with (Owen Daniels and Virgil Green), but there’s a reason why Denver traded for him. I say take a number and stash Davis on your bench this week. 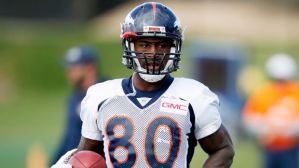 The time to pick up Vernon Davis is now (Via Fox)

Last week we saw many players go down with major injuries, crippling fantasy teams everywhere. Pittsburgh Steelers running back Le’Veon Bell tore his MCL and PCL, and he is done for the season. DeAngelo Williams is going to replace him, and if you were lucky enough to snag him on the waiver wire, he should be in your lineup right away. Chicago Bears running back Matt Forte suffered damage to his MCL and will be out for a few weeks. Enter Jeremy Langford. I expect him to have a big week against the Chargers on Monday Night Football.

Patriots tight end Rob Gronkowski takes on the Washington Redskins this week, who have allowed the 12th fewest yards per game to tight ends. Of course, they’ve yet to face Gronkowski and I’m predicting three touchdowns today from Gronk.