MLB free agency is upon us. Over the next couple of weeks, I’ll preview teams around the Major Leagues, and give you a look at what to expect. We start off with my team, the New York Yankees

The Yankees will not see too many losses this offseason, losing just Chris Capuano, Stephen Drew and Chris Young to free agency. I see all three in different uniforms in 2016.

With Mark Teixiera and Greg Bird (who should and will start the season at AAA) at first base, Didi Gregorius at Shortstop, and Chase Headley at third base (and of course Alex Rodriguez at DH/3B), the Yankees are pretty set at the infield positions. I will say that they need “could use” an improvement at second base. They don’t NEED one. With Jose Pierla traded to the Padres earlier today, I’d look to use the 25 year old Rob Refsnyder at second base as the Yankees look towards the future. Brendan Ryan is going to be 34 years old on opening day, and should stay as a utility infielder. The argument for Ben Zobrist is intriguing but he’s going to turn 35 next year. I’d only take him on a two year deal. Today’s trade of Pierla does open up a spot for him though.

There aren’t really any holes in the outfield either. The Yankees have Brett Gardner, Jacoby Ellsbury, Carlos Beltran, Dustin Ackley, plus Mason Williams and Slade Heathcott locked in the outfield. If I were the Yankees, I don’t think that I’d trade Gardner, as he represents the leader of the clubhouse after Derek Jeter’s retirement. But, it was reported Wednesday morning that Brian Cashman discussed trading Gardner with the Seattle Mariners. It’s not a big surprise as the Yankees look to trim payroll and Gardner has three years at $39.5 million left on his contract. Speaking of the Mariners, an interesting NY Post column on Tuesday questioned whether the Yankees could trade a hefty Ellsbury contract and a prospect northwest to Ellsbury’s hometown team (Although he’s really from Oregon), for the hefty contract of Robinson Cano. Boy, would that change things. I don’t really see that happening because Seattle is in “win-now” mode, but an interesting idea none the less. If the Yankees were to go out and trade Jacoby Ellsbury though, I’d welcome it. The Yankees could however trade one of their outfielders, and make room to sign Justin Upton, who’d be a great addition to the team and would succeed in Yankee Stadium. On the other hand, the team just acquired outfielder Aaron Hicks from the Minnesota Twins, trading away catcher J.R. Murphy. Hicks was a .256 hitter with 11 home runs and 13 stolen bases. Clearly this is an acquisition of a right handed hitter to replace Chris Young. I like the move, as it gives the Yankees a great defensive player in Hicks. Not much to change, but acquiring an outfielder would be ok with me. 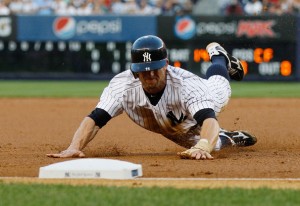 Should the Yankees keep Brett Gardner? (Via DGS)

The Yankees do need some pitching. Yes, their bullpen is good, but it can always improve. The reports of Brian Cashman being open to trading Andrew Miller are definitely true, because other than Severino, a guy who I really wouldn’t trade for anything, no player is un-tradable. (See side note below)

Side note: One of the things that I’d like you, the readers, to take away is that General Managers have hundreds of discussions with other GM’s over the course of the season. Many of these do not turn into actual trades, and so hearing that a name was discussed doesn’t really mean much. That’s because every name is discussed, whether the GM wants to trade him or not. That’s how Josh Donaldson got traded to the Blue Jays last season. Do you really think that over 17 years, Cashman was never approached to discuss trading Derek Jeter? Of course he was. He just never traded him. So when we hear these names dropped over the next few months, just remember that every name has been discussed.

Ok back to the pitchers market. If Miller is traded, I’d slide Delin Betances into the closer role and go after Cincinnati Reds reliever Aroldis Chapman. Chapman and Betances would make for a deadly combo. But I like the Betances-Miller combo right now so I’m not so quick to trade the closer. Then we get to the starters. Masahiro Tanaka is the ace and he is going to stay. So is Michael Pineda and Luis Severino. Then there’s CC Sabathia, Nathan Eovaldi, and Ivan Nova. There is room for improvement and I will immediately look at David Price, and not Zack Greinke. They’ll both go for a lot of money, but what’s the defining factor for me? The draft pick compensation. By signing Greinke, the Yankees would have to forfeit their first round draft pick. With Price, they won’t have to surrender anything because Price was traded mid-season. So if you’re the Yankees, why sit back and wait till next offseason to get a starter? One of the best is right in front of them, so they should definitely get their feet in the door. Jeff Samardzija’s name has been raised in possible Yankee targets. My personal favorite option comes out of our nations capital (and no, I’m not talking about Bryce Harper, who many have already declared a future Yankee in 2019). I’m talking about Stephen Strasburg. Well why would the Nationals get rid of Strasburg, you might ask. Well, the former number one overall pick will become a free agent at the end of the 2016 season. His agent, Scott Borus, has been known to take his players into the open market. Why not test drive Strasburg for a year before making a decision on him and overpaying? Strasburg to the Yankees would be an interesting acquisition and shouldn’t go overlooked. All in all, the Yankees should mostly be looking at pitching for this offseason.